When I first came to Amsterdam in 1980 I asked where the slums were and was directed to Oost. I failed to find anything resembling the run-down tenements and council estates we called slums back in the UK. Concentrations of immigrants and poor whites, okay. But Amsterdam is rich. Its housing corporations take pretty good care of their housing stock. Some 70% of Amsterdam's houses is in corporation hands, 20% is owned by private landlords and 10% is owner-occupied. 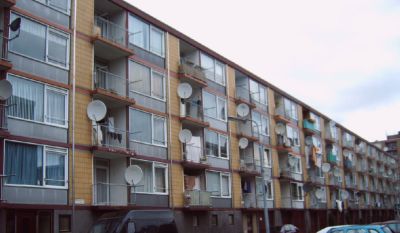 Many immigrants and other low income families are concentrated in the newer suburbs - nicknamed satellite city. The cable tv firms might show CNN and the BBC and even Spanish or French tv, but not an Arabic broadcaster.